Fun Football Bets That You Need to Know About

We’re big about football, and if you’re mad about football then you’re in good company! But before you can bet on the big games, you need to know the type of bets that are common. This will give you an edge over newbies that still haven’t gotten the terms down yet.

We’re going to quickly run down the most common bets you’ll hear about, and get a chance to bet on. It’s up to you to decide which one is going to be the one that you ultimately choose, but keep in mind that you can choose more than just one.

The first one is the Full Time Result (FTR). It’s where you’re betting on the match result, or the 90 minutes result. It’s commonly referred to as WLD (win/lose/draw) or 1×2 (pool notation for home win, draw, and away win).

Simply put, you’re predicting whether the result at the end of normal time will be a win for a team, a win for the other team, or a draw.

The classic example would be Liverpool v Chelsea, with Chelsea to win:

You win if Chelsea wins.
BUT you lose if it’s a draw or if Liverpool wins.

Since this is a pretty straightforward bet, many punters put a lot of matches together in a football accumulator, trying to predict the outcome of all of them. This is risky, so make sure that you’re never betting with any money that you can’t afford to lose!

You’ll see references to “normal time” a lot. You need to understand that normal time excludes extra time as well as penalties, but it does include injury time. This is known as the 90 minutes result. 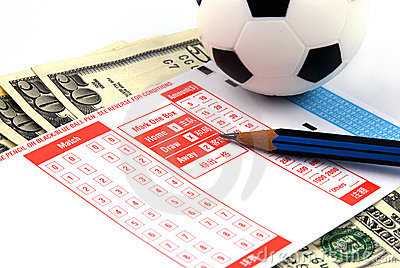 Another common bet is the Total Goals (under/over)

Under/over bets are two option bets. You’re betting on whether there will be more or less than the number of goals quoted. The bet is usually more or less than 2.5 goals, but you have some variations — 1.5, 3.5, and 4.5. This is at the end of normal time. It’s a wildly popular bet as there are only two outcomes and it can be possible to predict high and low scoring games even when you don’t know what the score will be.

So if you were betting: Newcastle v Wigan: Over 2.5 goals:

There’s also the correct score (CS), where you’re predicting the score at the end of normal time. The scores are quoted as “home team score – away team score” so make sure that you look carefully before betting — the way you fit the numbers makes a difference!

So what about that Liverpool v Chelsea match up again? If you are betting based on a 2-1 correct score, then you win if Chelsea wins 2-1. However, you lose if there’s any other score.

The chances of winning are quite low, so this isn’t a popular bet but you will see it from time to time.

The next one is known as half time / full time (HT/FT), which is also known as “double result”. This is a bet that predicts the result at half time and full time in the same bet.

Yes, we’re going back to our Liverpool and Chelsea match. There’s 9 possible results for the double result bet. At half time there are 3 possibilities — a draw, Liverpool winning, or Chelsea winning. The same possibilities exist at full time.

So if you do: Liverpool v Chelsea: Chelsea – Draw. This wins if Chelsea is winning at half time AND it’s a draw at full time. However, this loses if any of the other 8 situations occur.

It’s a tough bet because you have plenty of risk involved. If a team is heavily favored to win, then betting on it to win at half time AND full time gives you better odds than just betting to win at full time. But it really is risky, so you need to be following your favorite team on a deep level to pull this type of bet off.

There’s also the First Goal Scorer bet — which is self-explanatory. There’s even an option for “no goal scorer” which exists if there’s no goal scored in normal time.

So if we were to place a Arsenal v Wigan: Walcot to score first, you win ONLY if Walcot scores the first goal and you lose if any other player scores first.

There are also exotic bets out there, but we wanted to include the most common football bets that you’ll see come up. We hope this helps, but if you have any questions…just ask!