admin Comments Off on Different Types of Bet

There are numerous different types of bet and below we have listed and explained them:

Win: The easiest and most popular bet to place. You are betting on your selection to win (be it a race or sporting event). If it does win you are paid out at the winning odds. For example, you bet £100 on Man Utd to win the Premier League at odds of 2/1. If they win the league you will receive €300 (your winnings and your stake returned).

Place Bet: With a place bet you are betting that your selection will finish in a place. The amount of places will differ depending on the event and the number of runners/participants. In the majority of cases a place is 1st, 2nd or 3rd. However, in events with a larger number of runners such as a horserace (handicap with 13 or more runners) or a gold tournament (which can have 100+ participants) place are paid out on the 4th place and in some cases up to 5th place under special bets offered by some bookmakers. Likewise, horse races with 5-7 runners only pay places to the 1st and 2nd placed horses. Also check the conditions of places before placing the bet – they should be clearly displayed.

Each-way Bet: An each-way bet is when you are betting on your selection to win a race but also to be placed in a race. You are in affect betting half your money that the selection will win and half your money that it will be placed. For example, you bet €10 each/way on a horse that is priced at 8/1 in a race with 8 runners. If the horse wins, you will receive €90 (win at 8/1) + €30 (place at ¼ the odds) or €120 in total. If the horse came 2nd or 3rd you would receive €30.

Laying: Laying a selection is a bet that it will not win. It has grown in popularity over the last few years due to the growth of betting exchanges. If you lay a selction and it loses you win. In contrast, if you lay a selection and it wins, you lose. For example, a punter lays Horse A at 5/1 in the Derby. You will set a max loss, say €500, which means you will take bets up to €100, as if the horse wins you will have to payout €500.

A Double: A double is a multiple bet that links two separate events/selections. For it to win both selections must win. For example, you do a €10 double that includes Horse A to win the 2.10 at Aintree at 2/1 and Horse B to win the 3.50 at York at 1/1 (Evens). It Horse A wins you will have €30 going on to Horse B at 1/1. If Horse B wins you will get €60 in return. If only one selection wins the bet will be a loser. 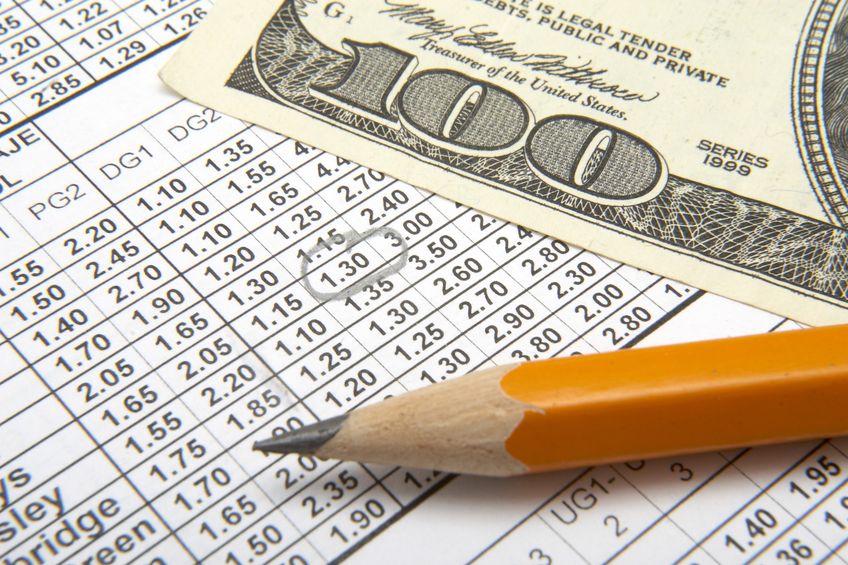 A Trixie: A trixie is a bet that includes three different selections for a total of four bets. These four bets are three doubles and one treble. Lets assume the trixie includes three horses: Horse A, Horse B and Horse C. The doubles in the bet would be Horse A & Horse B, Horse A & Horse C, Horse B & Horse C and the treble is all three horses together. A minimum of two of the selections needs to win for the bet to produce a return.

A Yankee: A Yankee is a multiple bet that has four selections. It includes 11 bets: 6 doubles, 4 trebles and 1 fourfold on the different combinations of the four selections. A minimum of two of the selections needs to win for the bet to produce a return.

Lucky 15: A lucky 15 is similar to a yankee in that it has four selections, however it covers 15 bets. It includes 6 doubles, 4 trebles, 1 four-fold and 4 singles. A minimum of one of the selections needs to win to produce a return.

Super Yankee (Canadian Yankee): A super yankee or a Canadian yankee is a bet that consists of 26 bets involving 5 selections; 10 doubles, 10 trebles, 5 four-folds and 1 five-fold.  A minimum of two of the selections needs to win to produce a return.

Heinz: A Heinz consists of 57 bets involving 6 selections; 15 doubles, 20 trebles, 15 four-folds, 6 five-folds and 1 six-fold.   A minimum of two of the selections needs to win to produce a return.

Super Heinz: A Super Heinz contains 7 selections and 120 bets; 21 doubles, 35 trebles, 35 four-folds, 21 five-folds, 7 six-folds and 1 seven-fold. A minimum of two of the selections needs to win to produce a return.

Goliath: A Goliath is based on 8 selections and contains 247 bets; 28 doubles, 56 trebles, 70 four-folds, 56 five-folds, 28 six-folds, 8 seven-folds and 1 eight-fold.A minimum of two of the selections needs to win to produce a return.

Straight forecast (SFC): A Straight Forecast is a bet that chooses the two selections that will finish 1st and 2nd in an event in the correct order. In horse and greyhound racing a Straight Forecast dividend is declared based on the starting prices of all the runners in a race.